Look trying to describe this type of artifacting can be difficult at times and my google-fu was not working when finding a solution to this issue. I've compiled a gallery of some images to attempt to help https://imgur.com/a/wBDrEB1 ... 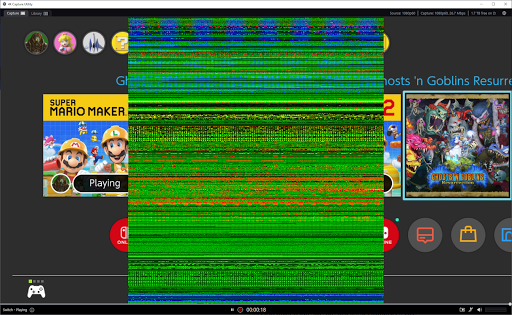 It was to the point where I opened an RMA request to Elgato and began working with their support team. I was troubleshooting this issue as much as possible to no avail. I didn't even figure out a way to consistently replicate it. It survived full Windows reinstalls! Then support got to the point where they had me use a tool that basically saves a bunch of data into a SupportInfo.zip ... Now this is pretty neat, grabs some log files, some standard windows DxDiags, bunch of other likely just combined scripts. I eventually figured out I was able to get it to work occasionally after a fresh restart, just not a "cold" shut down.

Then it dawned on me, didn't work after a cold boot. And I had done some Windows reloading recently not just for this issue, but another as well. Some may already know where this is going.Windows 10 doesn't truly shut down by default, it's a setting you have to "disable" https://lifehacker.com/shutting-down-windows-10-doesnt-actually-shut-down-wind-1825532376 . Interestingly Elgato recommends this if you're having installation issues https://help.elgato.com/hc/en-us/articles/360028243331-Elgato-Game-Capture-4K60-Pro-Installation-Issues ... mine installed fine so I never looked at it.

Doing this many windows reloads closer together have also inspired me to write a powershell script for freshly installed windows with many of my settings, and some software. And since I spin up VMs for random testing and help others out, it's really nice to have. I probably should put this in a github or something, but for now here's a zip with my script and some of the scripts that inspired me. SampleWindowsScripts.zip

If you want a simple powershell script to fix this

Posted by Stealthgyro at 1:09 PM